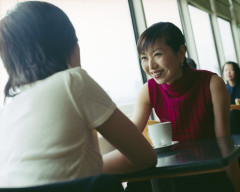 Opening up opportunities for cultural sharing and civic participation can greatly enhance the resettlement process for new arrival communities and influence effective collaboration for the many self-help organisations and groups that exist within such communities.﻿

The Refugee Council in the UK states; ‘Many refugees [and new arrivals] have experienced physical persecution. Some have been imprisoned in harsh conditions or have been subjected to forms of torture. Others have lived with the fear of persecution and the stress and anxiety this causes. The effects of persecution are not always immediate. Physical and especially psychological symptoms may appear years after the event. It is difficult to know how these symptoms might manifest themselves and it is often difficult to identify them when they occur’.﻿

To this end we seek to provide or signpost to﻿:

We already provide training for community researchers and can also help your organisation with evaluation, community market analysis, commissioning and engaging with hard to reach groups.

In a 2007 report called 'From Refugee to Citizen: ‘Standing On My Own Two Feet’﻿ by Refugee Support it is stated that;﻿

'The arrival of refugees in the UK is not a recent trend and during the early years of the 20th century many thousands of refugees arrived here including eastern European Jews, Belgians, Basque children and those fleeing Nazi-occupied Europe.

'Between 1939 and 1949 nearly 360,000 Polish refugees arrived in the UK (Sword, 1989). The reception of Basque, Jewish and Polish refugees during the 1930s and 1940s was criticised for poor co-ordination. As a response to this lack of co-ordination, the British Council for Aid to Refugees (BCAR) was formed in 1950, at the request of the Foreign and Commonwealth Office (British Council for Aid to Refugees, 1980).

'1957 saw the arrival of Hungarian refugees who were evacuated to the UK from camps in Austria. Since then there have been many diverse migratory movements to the UK and many changes to the way that policy makers have responded to these population movements'. ﻿

You can read or download the full report here. (this is a large pdf file)

Further details regarding programmes of work referred to on this page will be added in due course as they arise.